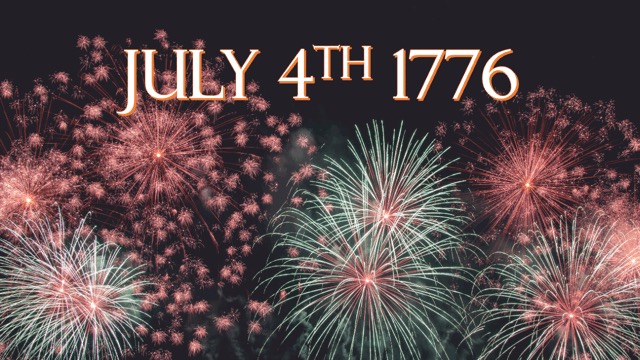 As we celebrate this blessed July 4th, let us consider the attitudes of those who founded our nation. They declared “We mutually pledge to each other our Lives, our Fortunes, and our Sacred Honor” So reads the final sentence of the Declaration of Independence. Initially signed by John Hancock on July 4, 1776, 55 more men were to add their signatures by November 4th of that same year. Each signature on this document was an act of treason against the crown of Great Britain, and marked every signer for imprisonment and death

These men were not poor, insecure malcontents. They did not participate in rebellion against the most powerful nation on earth for personal gain. Every revolution before or since has been led by men who had nothing to lose, but the signers of the Declaretion were of a different mold. From a position of power, wealth, and authority, they gave everything they had in order to guarantee freedom for all. Many of these man lost their businesses, their homes, their families, and even their lives in order that every person in the colonies could enjoy liberty in the new country that would become the United States of America. They were faithful to the pledge they made to each other and to all their fellow citizens. They gave their lives, their fortunes, and their sacred honor that all might be free.

In contrast, the elites in politics and media of out present day, enriched by the intoxicants of fame or elected office, seem interested only in retaining what is theirs. They are not willing to yield their fortunes or risk their positions in the establishment for the betterment of our nation. They advertise themselves as champions of the downtrodden, yet use those whom they claim to represent as electoral pawns in order to insure the continuance of their power. Jesus identified these individuals in Matthew 23:3-4 “…But do not do what they do, for they do not practice what they preach. They tie up heavy, cumbersome loads and put them on other people’s shoulders, but they themselves are not willing to lift a finger to move them.”

An example of this behavior can be found several years ago in the alleged “Affordable Care Act”, which former president Obama promised would allow everyone to keep the doctors of their choice, and substantially cut the cost of premiums. The reverse was immediately obvious: people were forced to change doctors, and premiums skyrocketed. This law was passed over the objections of a majority of Americans, and resulted in deductibles so high that most families could not make use of their policies. In effect, they had no health insurance. They were required by law to buy Obamacare, or to pay a tax penalty. A burden was laid upon the shoulders of our citizens, and those in power declare they cannot remove it in it’s entirety. Thankfully, the individual mandate is gone, but the vote of one selfish senator who hated President Trump stopped complete repeal, in spite of his promises to his constituents to vote to repeal this onerous law. In addition, the elites in government always exempt themselves from the legislative disasters they foist upon the citizens. They always take care of themselves first.

The leaders of communist and socialist nations regularly guarantee that the laws and policies they brutally enforce exist to benefit “the people”. They mesmerize the populace with promises of a utopia that cannot exist. They promise government will provide, fully knowing that government does not make money, it only takes money. When government runs out of money, it’s leaders always take care of themselves first. The corrupt political philosophy of socialism does not benefit the people: it only benefits those who desire to preserve their power and control over the citizenry.

The inability of Congress to repeal and replace Obamacare, and move forward with a new agenda to protect our borders, is a reflection of the failed leadership that Jesus described. They do not practice what they preach, and they continue to allow the burden of a failed and punitive healthcare law and the disaster of open borders to remain on the backs of the people. This is so unlike the attitudes of the men who met in Philadelphia in the summer of 1776 and produced the Declaration of Independence. They were willing to give their all that others may be free. It appears that some in today’s Congress are willing for the people to continue in bondage if it means they remain free in their positions of power and influence.

LAND OF THE FREE

Our unique form of government, revealed by God to James Madison, has endured for 243 years. The United States of America was created to be a land of freedom. We should resist to our last breath the desires of those in authority who want to change our way of life and reliance upon the Constitution as written. Government derives its power and authority from the consent of the governed. We do not exist to enrich those in power in politics and the media at the expense of the soul of our nation. We were not created by God to be dominated by those who reject His authority and desire to move our nation from its foundation upon the truth of His Word.

We should expect those in elected office to have the same commitment as those who founded our nation. Serving in government is a privilege, not an entitlement. Let us encourage those who hold office and demonstrate a spirit of service and sacrifice to stand their ground and hold to the truth. Let us vote out of their offices those who occupy them for the sole benefit of themselves. Let us declare once again that we live in the land of the free and the home of the brave. Let us all commit once again to give our lives, our fortunes, and our sacred honor in the defense of our freedom. Happy Independence Day, and may God Bless America!