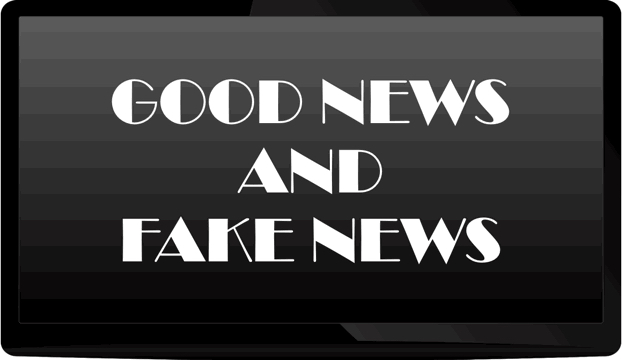 Much has been said lately about “fake news”. The mainstream media is replete with examples of “fake news”, and political groups of all stripes accuse one another of spreading “fake news”. We should be aware that the secular progressive media and many politicians desire to destroy the Judeo – Christian foundation of our nation. Anything is permissible for those with an anti-Christian agenda. No hypocrisy exposed, no lie patently outrageous deters the haters from their goal of controlling our lives and forcing us to accept their lawlessness and sin.

The first historical example of “fake news” can be found in Genesis 3:4-5, where a secular progressive said to Eve “You won’t die!” …,“God knows that your eyes will be opened as soon as you eat it, and you will be like God, knowing both good and evil.” Eve and Adam seized upon this piece of “fake news”, even though it was contrary to the truth they knew. They were already like God, made in His image! Believing satan’s report alleging God was holding something back from them resulted in the complete destruction of trust in God and obedience to His Word, the very foundation of human civilization. They “fell” for fake news.

Adam and Eve’s embrace of fake news set the stage for its’ dissemination throughout history. When Israel was poised to enter the promised land, they sent an advance party to check out their destination. General Caleb declared that they had discovered a land flowing with milk and honey, and that the army could easily conquer it. Other news sources on the team reported that “The land we traveled through and explored will devour anyone who goes to live there. All the people we saw were huge. We even saw giants there, the descendants of Anak. Next to them we felt like grasshoppers, and that’s what they thought, too!” (Num 13:32-33) Even though containing some truth, this fake news report was embraced by Israel, and an entire generation died in the desert because of their fear and disobedience to God.

What is fake news, and who is its’ producer? We can certainly name the individuals who run the networks and give us reports, but who is really behind the fake news trend? We know who brought the fake news to Eve. Who was the source of fake news in Jesus’ day? When facing fake news reports about who He was and His ministry, Jesus told the commentators “You belong to your father the devil, and you want to do what he wants. He was a murderer from the beginning and was against the truth, because there is no truth in him. When he tells a lie, he shows what he is really like, because he is a liar and the father of lies.” The producer behind “fake news” is Satan, and he will tell any lie to advance his progressive agenda. Understanding this we can call “fake news” by its’ age old and true name: LIES!

JESUS IS OUR ONLY HOPE

Not only does fake news attack the leaders of our nation who desire to return to traditional values, it also attacks Christians on a personal level. Just like he did with Eve, producer and correspondent Satan twists the truth and lies about God and His plans for our lives. As he did with Israel, the devil tells us we cannot win and brings an evil report about our future. If we want to succeed as a nation, we cannot believe the fake news about our president and others who desire to Make America Great Again. We cannot trust those who lie and distort for a living in the media and political establishment. If we want to be great for God, we cannot believe the devil who says we must live lives of sin, sickness, poverty and defeat. Whose report will we believe about our lives? Will we believe the fake news from the devil, or embrace the Truth of God’s Word? Will we accept the fake news, or the Good News?

Romans 10:9 tells us “If you declare with your mouth, “Jesus is Lord,” and if you believe in your heart that God raised Jesus from the dead, you will be saved.” The Greek word here translated “saved” means to deliver or protect, heal, preserve, do well, and be made whole. The Good News tells me that if I am a believer in Jesus, I can live a life of deliverance from destruction, disease, and depression. God wants to use Christians to bring Good News to the world. Jesus is the only hope for our nation and every other nation in this world. In Him we are made whole and receive the GOOD NEWS. Fake news will fade and fall upon the ash heap of history, but the Good News will stand for eternity. The Good News says thatJesus loves us and that we have victory through His Name. Revival is coming to the USA. There is nothing fake about that. Think about it!