AM I A CLACKER? 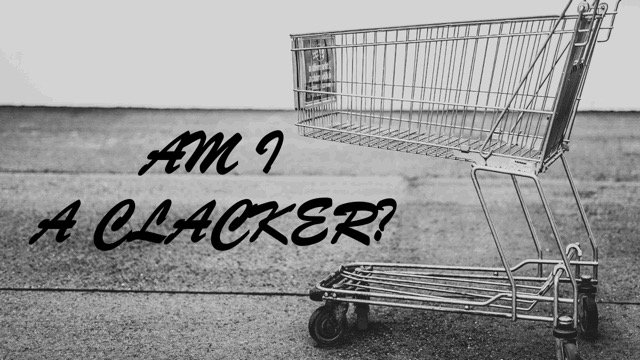 I went to Walmart a few days ago. I entered through the automatic and overworked doors and headed for the carts. Yanking a cart from the end of the third line, I headed into the store. I had almost reached the inner doors when I realized my mistake: I had chosen a CLACKER. For the less erudite shopper, a few words of explanation may be necessary. A clacker is a shopping cart that has experienced a high degree of customer inflicted trauma and has developed uneven wheels. When pushed, it makes an irritating clack-clack-clack sound. There are three types of clacker: The Garden- Variety Clacker, which is unpleasant but not completely unbearable, the Gonzo Clacker, thoroughly annoying, and the Godzilla Clacker, which causes seismic tremors when urged forward by an overzealous driver.

I had chosen a Godzilla Clacker, which I abandoned in favor of a new cart, promptly discovering it was a Garden-Variety. Pushing that one aside, I found a Gonzo Clacker at my service. It wasn’t until my fourth effort that I uncovered a smooth running cart, the gold standard of shopping conveyance. Breathing a sigh of relief and gliding into the store, my senses were immediately arrested by clacking carts of all kinds. I wondered how the many people pushing those clacking buggies could stand them, until it hit me: every one of them is driving a clacker. Hundreds of individuals were clacking along and clacking alike. They were surrounded by and inundated in clacking, to the point they didn’t notice it anymore.

Since God cannot lie, what He says is reality. The Creator of heaven and earth is not moved by our thoughts and feelings of what is real. He IS real, and judges every action of man by His standard. The ways of mankind are ever open to him, and He will always act according to His word and what He has promised to do. No matter what reality I create for myself and others, and when everyone in the crowd is acting in the same manner, saying the same things, and choosing the same path, it’s difficult to be different. It’s tempting to clack along with everyone else and forget that God has called us to live lives that are seperate from the world. Paul wrote “Therefore, come out from among unbelievers, and separate yourselves from them, says the Lord. Don’t touch their filthy things, and I will welcome you. And I will be your Father, and you will be my sons and daughters, says the Lord Almighty.* (2 Cor 6:17-18) I can clack along with the rest of the world, oblivious to the noise, or choose a smooth running relationship with Jesus. I have made my choice: I am a Christian: I can never be a clacker!